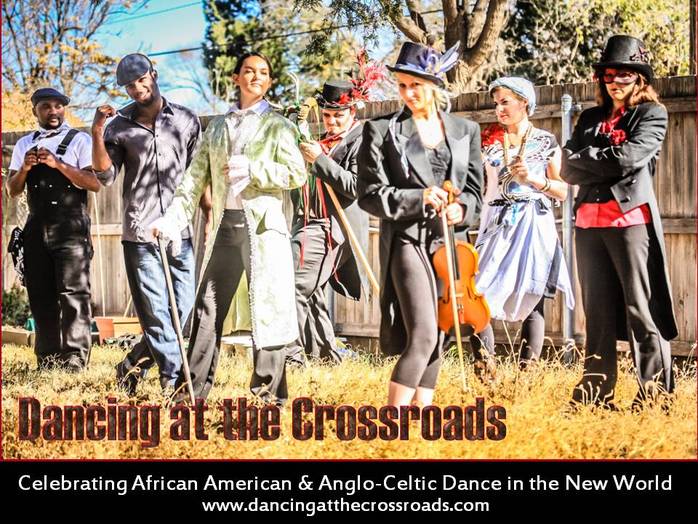 From an interview, just concluded:

>What served as the impetus for creating this piece?

Several factors served as impetus for creating the piece. I've been a practitioner of these styles (Anglo-Celtic and Afro-Caribbean) for four decades, know them intimately, love them passionately. As a scholar, I'm interested in the interplay of immigrant musics in the Americas--I've researched and taught on these topics, and have a musicological monograph coming out in September called The Creolization of American Culture. As a bandleader, I was seeking a way to harness and synthesize the talents of an extremely vital, dynamic, and creative corps of young artists, most of whom I've worked with at the TTU Vernacular Music Center for several years now--in that sense, this show is a kind of "valedictory address" for these artists as they launch their professional careers. Finally, I think the show crystallizes a central tenet of the VMC philosophy, which is to seek the synthesis of research, teaching, creativity, and advocacy.

>Do you think that this is a story that most people don’t know?

I think it's a story whose historical resonance many people won't have previously recognized. Many folks of course know that immigrant traditions--especially Anglo-Celtic and African-American--played a key role in the synthesis that led to blues, jazz, country music, vaudeville, tap-dance, hip-hop, and rock & roll; but I think fewer people recognize both the complexity and profundity of that synthesis, and, actually, the historical depth of the story. I think that "Crossroads", as an image and a stage show, captures a central fact in the American experience: that we all came from elsewhere, willingly or unwillingly, and that our historical encounters here, on this continent, made our music, and our people, what and who we are. I think many people don't consciously recognize just how true that is, yet at the same time they intuit that it's a very deep, very "American" story. It's Huck & Jim on the raft; it's Elvis Presley & BB King backstage in Memphis; it's Buddy Holly in Lubbock bringing Little Richard home to meet his parents. It's who we are, and where we came from. And, possibly, it might just give us a vision of where we could still go, together.

Interview with Chris Smith on the show's origins

Tell me a little bit about why this production will differ from others? What’s the really interesting hook in this story told in dance?

This is a story about meetings, between cultures, peoples, and dance traditions. And not only the "mythic" meetings exemplified by some named characters ("Elizabeth Bennett", "Baron Samedi", "The Demon Fiddler") but also actual, historical meetings (exemplified by other named characters like “The Bluesman” or “The Creole Girl”) which are at  the roots of American popular culture. The remarkable thing about this story is that it is, in essence, a true story--this meeting between Afro-Caribbean and Anglo-Celtic dance music traditions is actually where American popular music and dance came from. (cast photos here)

Can you tell me a little bit about the research angle of this piece?

Sure. The fields of "Devised Theater" and "Engaged Scholarship", new fields on university campuses across the country, both investigate the points at which "creative activity" (like composing and staging a dance show) and "research" (like describing the historical, folkloric, and/or mythic sources of the music and dance) can come together: these new fields recognize that "research" and "creative activity"--especially in the visual and performing arts--are not two different phenomena, but rather are related activities, which meet in the zone of the creative imagination. In light of this, in 2013-14 Bill Gelber and myself will be presenting solo or joint papers at conferences in Budapest, Brazil, Barcelona, Alabama, California, and elsewhere. In addition, we are launching an online journal and symposium on TTU campus: the "Crossroads Project."

What do you think an audience member will appreciate most about this project? What are some of the more unique aspects?

There are a couple of different aspects to this production which I think are both unique, and uniquely engaging. First is the energy, intensity, and charisma of the young cast: young actors/singers/dancers whose own creative personalities, experience, and expertise have shaped the characters to which they're assigned. Second is the immediacy and accessibility of the repertoire: the vast majority of these dances, tunes, and songs are traditional pieces, from the Anglo-Celtic and Afro-Caribbean traditions, but re-imagined in exciting and engaging ways. Third, and perhaps the most unique and engaging aspect, is the actual historical roots and foundation of the story: this is not some abstract or trite tale: it is an actual mythic history, an actual narrative of what actually happened on this continent to make a nation of "Americans". We as a country and a people are shaped by the experience and interaction of diverse immigrant groups--this show tells that story, in music, mime, and dance.

Tell me a little bit about your involvement in the program, and just a smidge about how the idea began and where it’s hopefully going. Just kinda draw the lines of who’s at the top of this pyramid and how it works between music and theatre and dance.

Well, the story originates with me. In spring 2012 we had presented a TTU Celtic Ensemble program on a "crossroads" theme, where we played with Anglo-Celtic and African American repertoires. But I realized, after the success of that program, that the material could actually be shaped in a fashion that conveyed this mythic/historical narrative. And then I hit on the idea of using the classical verities as they were laid down by Aeschylus and Euripides: 4 tableaus, each set in a different season and at a different time of day in the wheel of the year; so Scene 1: a country crossroads dance at mid-afternoon in midsummer; Scene 2: a country pub or Deep South juke joint at evening in autumn; Scene 3: a crossroads at midnight in midwinter, and then Scene 4: a harbor at dawn in the early spring.

Then the narrative and the specific repertoire came together very much as a reflection of the casting: I knew the young performers I wanted to use (most of them current or former members of VMC ensembles), I knew their capacities and personalities as both people and also as performers, and I worked out a pattern and structure for each piece, each scene, and the show overall that built upon that knowledge. If any one of the 9 cast members or 5 band members were different, the repertoire and thus the narrative would have to be different. In that sense, it's not only a kind of archetypal story, but also a very personal one: personal to me, and also to each of the young players/singers/dancers/actors for whom I wrote it. I should also mention that each of these young people (see http://dancingatthecrossroads.com/team.html) brings additional skills to the mix: sound, lighting, and visual design; costuming and choreography, and so forth. And we're fortunate to be able to draw on two VMC performance groups, Caprock Morris (http://caprockmorris.com) and the Tech Irish Set-Dancers (http://techsetdancers.com), whose ensembles will have secondary but nevertheless essential roles to play.

Gerald Dolter had the vision and generosity to invite the collaboration between VMC and LMM; Daniel Hogan, LMM director of production, immediately grasped the archetypal/mythic elements as well as the pragmatics; both Bill Gelber and Genevieve Durham, Theatre & Dance colleagues I've admired and collaborated with for year, volunteered to serve as dramaturgical and choreographic advisors; and my old friend Rich Remsberg, a photo archivist who works with Ken Burns and the History Channel (among others), agreed to create the between-scene audio/visual slideshows. So there is a student-centered cast & band, a faculty- and community-centered creative team, and a great deal of wonderful collaboration and sharing of ideas going on.

I should also say that there is already interest in taking the show to other venues, especially on college campuses, in 2013-14, in both the Southwest and Northeast. And there is a significant collaboration coming with the international Country Dance and Song Society (http://cdss.org), on the occasion of their centennial in 2015. So the show will continue to have a life and evolving identity!

right-click and select "Save As"